Public Responsibility Attribution in the EU 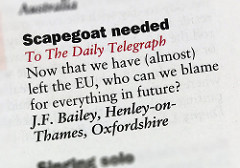 For democratic polities to command legitimacy, it is essential that the political actors responsible for policy-making can be held publicly accountable. Holding policy-makers accountable presupposes that responsibility for policies can be attributed to particular and identifiable political actors. While even in democratic states the attribution of responsibility for any given policy is hardly ever straightforward, we know relatively little on how the public attributes responsibility for the policies adopted by the European Union (EU), whose policies play an integral part in the day-to-day life of EU citizens and those affected by them.

Especially when the effectiveness of policies is in question, political responsibility and accountability become pressing issues:

By answering these questions, the project aims at improving our understanding of public responsibility attributions (PRAs) for policies enacted by the EU. To this end, we will analyze PRAs by means of media content analysis of the coverage of three different sets of EU policies in the European quality press:

The project is funded by the Deutsche Forschungsgemeinschaft (DFG) (Projekt number 391007015).

Picture taken by Brett Jordan and found on Flickr.